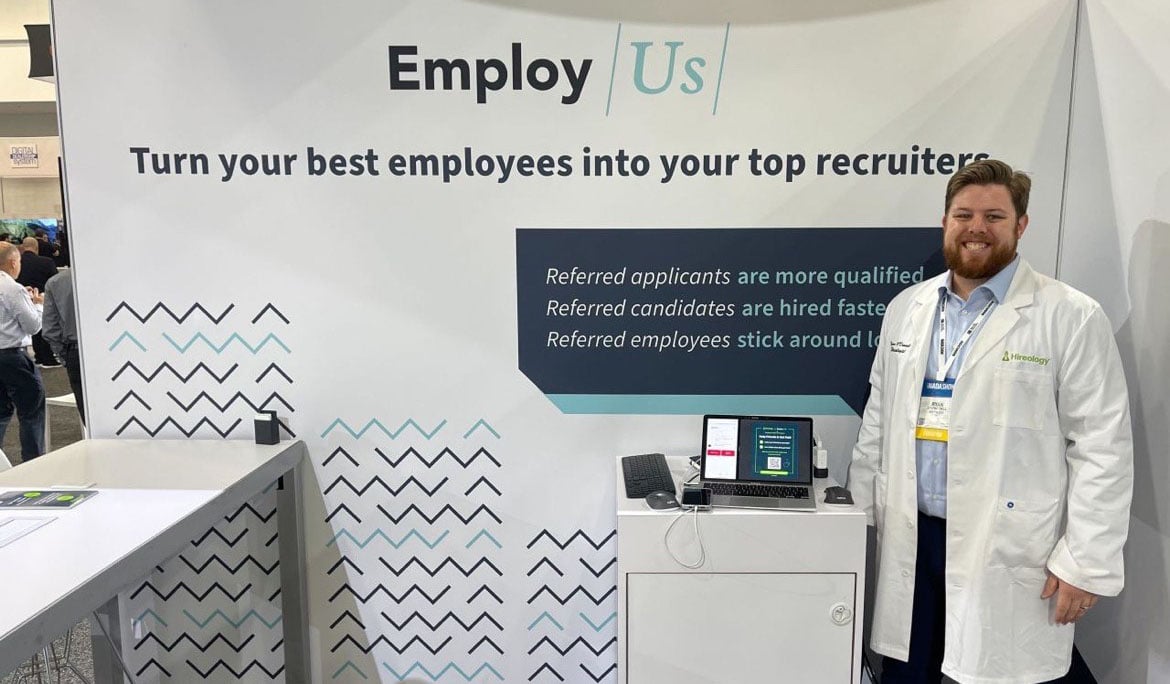 These founders faced a choice that’s common for companies that raise money: seek more funding, buy the company back from existing investors or sell — and selling ended up as the best choice.

In 2014, Ryan O’Donnell, a fresh graduate of North Carolina State University, teamed up with investor Jeff Stocks to found the recruiting platform EmployUs.

The platform was originally a job board and talent marketplace that served several local markets around North Carolina. With feedback from customers, the team learned many companies wanted to use the marketplace for one of their most effective recruiting channels: employee referrals.

“We literally got asked basically point blank, ‘I will pay more for this. What does it cost to get that [feature]?’” O’Donnell said.

So they pivoted to create what customers were asking for, and the current iteration of EmployUs, an employee referral software, was born. That value proposition led to a sale years later, in 2021, to Hireology, a recruiting and HR platform.

Surviving a tumultuous economy in the hiring industry

EmployUs helps companies encourage, track and reward referrals as part of their hiring process. After introducing the new offering, EmployUs was able to appeal to a broader customer base and target larger businesses with ongoing recruitment needs, which meant a recurring subscription.

EmployUs got attention locally in its early days, which helped fuel support and growth for the young founders. In 2014, they received a $25,000 grant along with office space and mentoring as part of a now-defunct accelerator program and won a NC IDEA grant up to $50,000; and O’Donnell, as the company’s CEO, was a fellow in the Raleigh-based entrepreneurial program ThinkHouse in 2015.

The company went on to raise a total of $1.5 million in venture capital over the next few years and temporarily enlisted several marketing and sales employees, according to local WRAL news, and also brought on a new CTO and co-founder, engineer Matt Cotter, to accelerate growth. By 2020, they were serving up to a few dozen large enterprise companies and staffing agencies that represented hundreds of thousands of users, according to O’Donnell.

Then came the pandemic.

In 2020, hiring came to a screeching halt across industries, and many customers paused their need for EmployUs. Around half of the company’s revenue “evaporated” in Q2 that year, O’Donnell said.

“The first few months of the pandemic were some of the scariest times of running EmployUs,” he said.

Like many companies, EmployUs rallied to offer support where it could. During the summer of 2020, they offered the product free for 60 days and gave new customers a $500 credit to promote their referral program. During that time, EmployUs signed up what O’Donnell said became some of its biggest accounts, and then revenue rebounded along with the rest of the economy, quadrupling over the next six months.

Early during the pandemic, EmployUs had received offers from buyers looking to take advantage of companies at their low point, but the founders had resisted.

“It was definitely a good thing that we didn’t sell when covid hit,” O’Donnell said. “We were able to double down and just focus on our customers.”

EmployUs became attractive to potential buyers once the job market flipped in favor of workers. As response to job ads waned, companies looked for new ways to fill jobs quickly.

How EmployUs was acquired by Hireology

After the recovery, the founders could think about next steps for growing the company. While they’d hired employees at one point, it had been a two-man operation since about 2017. They identified three options: seek new investors, buy the company back from existing investors or sell — and selling ended up as the best choice.

“A lot of companies saw that people weren’t applying to their job ads anymore; they needed to get creative of how they could hire,” O’Donnell said. ”So when we looked out at potential buyers, we definitely saw that was something that was definitely in our favor, because we were a source of hiring that was still working.”

They decided to sell because they knew they could grow faster as part of a larger company with more resources. But it was a challenge to get everyone — the team, customers and investors — on board with that being the next best step for the business. “One of our goals,” O’Donnell said,” was to make sure everyone was treated well and wanted to do business with each other again.”

To identify a right-fit buyer, they worked with brokerage Basis State, which specializes in selling software startups, often as acquihires, that have previously raised money but don’t want to or can’t raise another round.

“[Basis State] definitely, I think, played a part in getting the right partner.” O’Donnell said, “We had known Hireology before, but by running the process, we vetted all of our options and found the best one.”

Even though they could have approached buyers directly, working with a broker helped them field multiple offers without a ton of extra work. Basis State did the heavy lifting of vetting offers before the founders got involved, O’Donnell said.

“They had dozens of conversations with potential buyers that I didn’t have to have at the time,” O’Donnell said. “Our business was growing a lot, so I didn’t want to get too bogged down in that process. So they were great at qualifying interested parties.”

They closed the 7-figure, all-cash sale to Hireology in July 2021. While the exact sale price was not disclosed, O’Donnell said investors and founders all walked away with cash.

At the time of sale, the company had more than 100 customers and was generating about $700,000 annual recurring revenue (ARR), O’Donnell said. The move allowed Hireology, which raised $27 million in Series D funding in 2019, to bake an employee referral solution right into their platform.

While the transaction did not require them to stay on, the founders’ intention was to keep growing the business with Hireology, O’Donnell said.

“I think founders may think, I gotta get to the exit, but there can be a really cool path for growing the business as a part of [another company],” he said.

Now a product manager at Hireology, O’Donnell enjoys being part of an established team with the resources to fuel growth for the platform. Since the 2021 acquisition, its customer base has grown 3,500% year over year, and O’Donnell and Cotter get to learn how a larger SaaS company operates — and to focus on what they do best.

“As a founder, you always have to wear a lot of hats,” he said. “Thankfully, I’ve been able to take off some of the hats that either I’m not good at or I don’t enjoy and put those in the hands of folks who are great at it.”